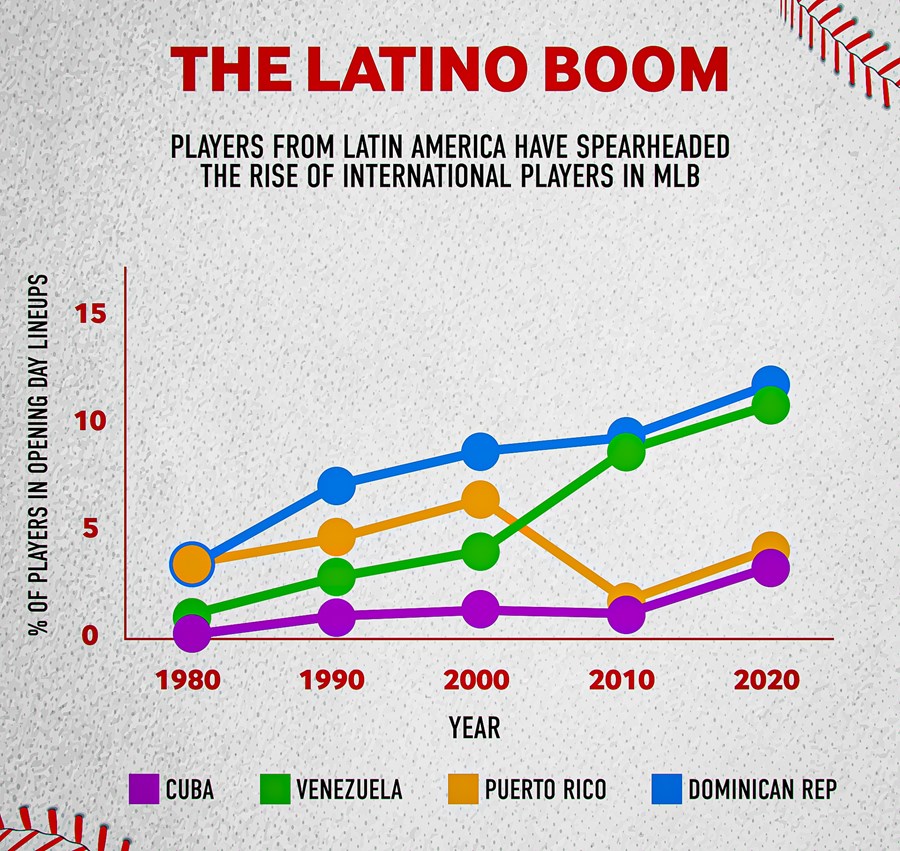 2020-10-28By WebEditorLeave a Comment on Latinos Command the Parade: Record of Foreigners in 2020 MLB

On 2020 MLB Opening Day, Latin America was represented with a record number of players. The 2020 Major League Baseball season is approaching its end, and after all the expert analysis and conversations that were given on the Play Ball regarding the Opening Day, foreign players set a record in terms of their presence for this regular season: 288 players represented 20 different countries in wide rosters. The previous record was in the 2017 season with 259 foreign players. The new number of 288 players came largely after the decision to expand the roster to 30 players.

The 20 countries were tied for the second-highest number of representatives in MLB history. The tradition continued in this MLB season and the Dominican Republic once again dominated as the country outside the United States with the highest number of players in Major League Baseball: 109. For the second consecutive season, they surpassed 100 players in the strongest baseball league in the world.

They dominated even if active rosters are taken as the criterion for the number of representatives. That criterion says that there were 300 international players on the 2020 Opening Day. Of that number, 192 are US citizens, while 108 are from abroad. That’s where we get back to the domination of the abovementioned four Latin nations. In total, they made 82.4% of foreigners: the Dominican Republic had 35 representatives, Venezuela had 31, Puerto Rico had 12, and Cuba had 11.

One country from Latin America set a record for the number of players competing in MLB – Colombia. Looking at wide rosters, it had seven players. Colombia had three players on active rosters, one fewer than Curacao (four). With one player apiece, Aruba and Honduras complete the list of the countries from Latin America that had representatives on 2020 Opening Day rosters. In total, 15 countries from nearly all continents featured on opening day rosters. There are a further seven countries represented in wider 40-man rosters of which four are from Latin America: Mexico, Nicaragua, Panama, and Peru.

The number of 108 international players of 300 made 36%. That figure can be seen as not so impressive but only when put outside the context. When the American League and the National League merged into Major League Baseball in 1903, there were just six foreign-born players on opening-day rosters. In 1940, the situation was even worse, with just two players from outside America named to opening day rosters.

It wasn’t until nearly 60 years since the formation of MLB, that the situation began to improve. And that was the period when Latin American players started to dominate in the process of the internationalization of Major League Baseball. In 1960, there were 12 overseas players who played on opening day (8.33% of all players in the league), perhaps the very first season to feature international stars in double figures. More specifically, 11 of those 12 were from Latin America. The year 1960 was a turning point when the number of foreign-born players in MLB began to rise significantly.

It’s best shown in the fact that two teams currently have the highest number of international players ever in any of the MLB rosters ever. Houston Astros and Minnesota Twins have 15 internationals apiece. They are followed by the Chicago White Sox and Miami Marlins with 13, while the New York Yankees and Cleveland Indians have 12 foreign players.